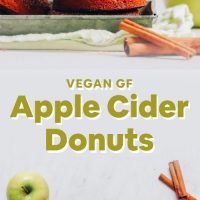 Hi, friends! Fall is in full swing over here in our part of the world, so naturally, we have one thing on the mind: comfort food. And nothing spells comfort food like these baked apple cider donuts. Consider them a hug from fall. Let’s bake!

This 30-minute recipe starts with aquafaba!

Aquafaba is the liquid from a can of chickpeas, which whips nicely and mimics the properties and texture of egg whites. This not only acts as a binder but also helps the donuts stay light and fluffy!

Once whipped, set aside and prepare your simple batter, which is comprised of wholesome ingredients like almond flour, maple syrup, coconut sugar, and our gluten-free flour blend.

These donuts get infused with apple flavor two ways: 1) applesauce, and 2) apple cider! Throw in some warming fall spices like cinnamon, ginger, and nutmeg into the mix and it’s like a baked apple dream.

After a short bake in the oven, it’s time to invert and let cool slightly to firm up.

At this time, you can brush your donuts with melted vegan butter (or coconut oil) and dunk them in a cinnamon-sugar mixture! This adds a little more texture as well as sweetness and warmth. Swoon!

We hope you LOVE these donuts! They’re:

This would make the perfect slow-weekend breakfast treat. Or you can make them in advance to enjoy throughout the week with coffee, this Healing 3-Ingredient Turmeric Tonic, or a Matcha Latte!

If you like this recipe, also be sure to check out our Chocolate Baked Vegan Donuts, Apple Pie Crumble Bars, Cinnamon Baked Apples, and Caramel Apple Cheesecake Tart! 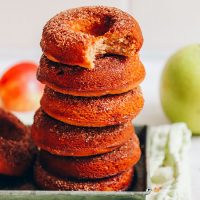 *We tried using flax seed in place of aquafaba and it didn’t turn out nearly as fluffy. If not vegan, you could also sub egg whites for the aquafaba.
*We recommend using Wellbee’s brand almond flour as it works best.
If you are nut-free, you can try subbing another seed meal, such as a blend of flax, sesame, and sunflower. We don’t recommend oat flour – it turned out a little gummy. If using coconut flour, halve the amount, as it is quite absorbent. We haven’t tested anything other than almond flour though and can’t guarantee the results.
*
Nutrition information is a rough estimate calculated with avocado oil, coconut sugar, and maple syrup and without optional ingredients. 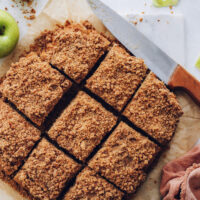 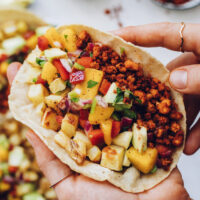 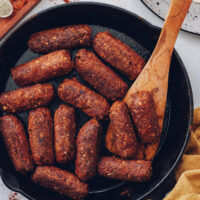 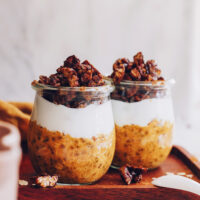