I have made vegan, gluten-free waffles before, but none compare to these.

These perfect waffles are crispy on the outside, fluffy on the inside, perfectly sweet, and undetectably vegan and gluten-free. Shall we?

This recipe was a reader request. Someone asked if I’d tested whipped aquafaba (the brine/liquid in a can of chickpeas) in classic waffles, which I hadn’t! So I got to work testing. Obviously, things worked in my favor.

This recipe requires just 30 minutes and 10 ingredients to make.

And, while pretty much any waffle iron will do, I have to say I recently retired my old waffle iron and replaced it with a Belgian-style waffle maker. Friends. I’m in love. It creates perfect, fluffy, massive waffles with little effort and zero non-stick spray or greasing. There’s no turning back now. I’m henceforth a Belgian waffle girl.

I think it’s safe to say aquafaba is the coolest egg substitute on the block and super versatile. It can be used straight from the can or whipped, and it mocks an egg beautifully in baked goods. Expect more recipes with it in the future!

I hope you LOVE these waffles! They’re:

These are officially my new go-to waffle. They’ve received rave reviews in my circle of friends (for good reason). Expect flavor variations in the future – because carbs for breakfast for the win.

These waffles are delicious plain, but they’re irresistible with peanut butter, banana, and maple syrup. So good!

THE BEST Vegan Gluten-Free Waffles made with 10 ingredients in 30 minutes. Fluffy on the inside, crispy on the outside, perfectly sweet and delicious! Top with maple syrup and fruit for the ultimate cozy breakfast.
Author Minimalist Baker
Print SAVE SAVED 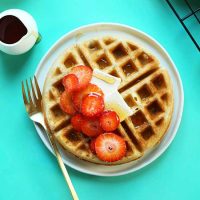 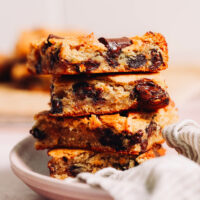 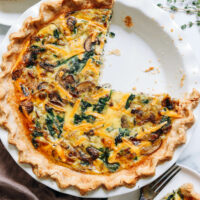 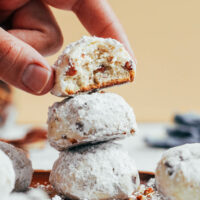 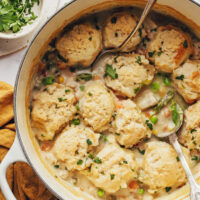