Growing up, cornbread was one of my favorite side dishes, especially alongside chili. My mom would serve it with butter and maple syrup and I would go nuts. It’s no wonder – I’ve always loved carbs.

Cornbread is a hotly debated topic and we don’t claim to be experts on its origin! But based on our research, it seems that the concept may have originated from a Native American dish called cornpone that was made with simple ingredients like cornmeal, water, and salt (source).

During the colonial era, cornmeal was an important ingredient and source of sustenance for enslaved individuals. It likely grew in popularity during these times and recipes evolved based on personal preferences and ingredient availability. It’s now popular throughout the US, but is especially associated with Southern cuisine.

The following is our plant-based, gluten-free version resembling what we grew up knowing cornbread to taste like!

In the past few years I’ve attempted vegan cornbread with success. However, I had yet to crack the code on vegan, gluten-free cornbread.

Without eggs, gluten-free baked goods tend not to rise and miss that crumbly texture necessary in cakes and quick breads.

However, recently I hopped on the aquafaba bandwagon and things have changed. Unless you’ve been napping for the last year, you’ve likely heard of aquafaba – the starchy brine left behind in a can of chickpeas (or other beans, such as white and kidney beans).

The brine has the protein and wizardry necessary to mock an egg and even whip up and bake into things like meringues and pavlova! It’s kind of amazing.

While I haven’t perfected my meringue or played around much with aquafaba as a stand-alone ingredient (yet), I have been loving it as an egg substitute in gluten-free baking.

This recipe is easy, requiring just 10 basic ingredients. Plus, it’s extremely simple if you know how to turn on a hand mixer and whip up egg whites.

Aquafaba behaves the exact same as egg whites, creating a stable base and binding agent for this fluffy, perfect cornbread.

I know some of you may be tempted to sub out the organic cane sugar for a more natural sweetener, but I would beg you not to do so.

The texture and flavor of the cornbread is compromised when things like coconut sugar or maple syrup are subbed in and I know this by experience. The only thing that might work is subbing stevia for 1/4 cup of the sugar. Otherwise, I hope you’ll try it and love it as is!

I hope you all LOVE this cornbread! It’s:

This is the perfect hearty comfort food to have on hand this fall and winter to pair alongside dishes like 1-Pot Vegan Chili, Vegan ‘Pulled Pork’ Sandwich, and Vegan Sloppy Joe’s! In my opinion, it’s almost undetectably vegan and gluten-free so everyone can enjoy (but no one will be able tell the difference). If not gluten free, try my Best Vegan Cornbread for 2!

If you try this recipe, let us know! Leave a comment, rate it, and don’t forget to tag a picture #minimalistbaker on Instagram. Cheers, friends!

The BEST vegan gluten-free cornbread made with 10 ingredients! Fluffy, crumbly, perfectly sweet, SO delicious! Pair with chili for the ultimate fall and winter treat.
Author Minimalist Baker
Print SAVE SAVED 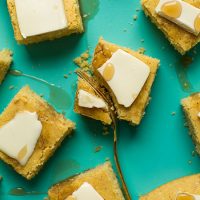 *For the gluten-free flour, I tried Fork and Bean’s Light Gluten-Free Blend and loved it! However, I’m also pretty confident that the Bob’s Red Mill 1:1 GF Blend would work here, as well as my DIY Gluten-Free Blend!
*Some of you may be tempted to sub out the organic cane sugar for a more natural sweetener, but I would suggest not doing so. The texture and flavor of the cornbread are compromised when things like coconut sugar or maple syrup are subbed in and I know this by experience. The only thing that might work is subbing stevia for 1/4 cup of the sugar (as noted). Otherwise, I hope you’ll try it and love it as is!
*Nutrition information is a rough estimate calculated without toppings. 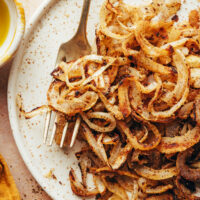 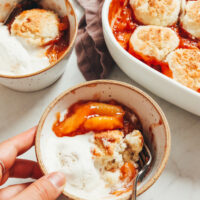 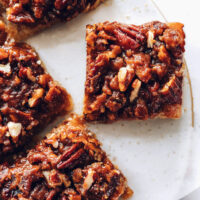