How to Make a Flax Egg

A step-by-step tutorial of how to make a flax egg, egg substitute for baking!
Author Minimalist Baker
Print SAVE SAVED 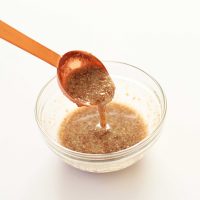 *This is not my original recipe, but one I discovered on many vegan baking blogs and have since adapted for my own use.
*Nutrition information is a rough estimate.

Below are some of my recipes which use flax eggs: