What Is Golden Milk?

Golden milk is a traditional Indian drink that has its roots in Ayurveda. In its simplest form it’s a blend of hot milk and ground turmeric, such as in this traditional recipe.

Our plant-based version is inspired by the lovely Nutrition Stripped and requires just 8 ingredients, 1 pot, and 5 minutes. We’ve been making McKel’s version for quite some time now with a few modifications, and it’s now a daily obsession.

What Are The Benefits of Golden Milk?

How to Make Golden Milk

Coconut oil adds richness and makes the turmeric more available for our bodies to absorb because it is fat-soluble. If oil-free, consider using a coconut milk with at least some fat content (canned vs. boxed). And by some wizardry, black pepper also makes the curcumin in turmeric more bioavailable, so it’s an important addition as well. 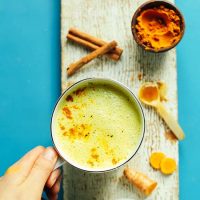 *If using fresh ginger, use a fine mesh strainer when serving to strain out the ginger for a creamy texture.
*If oil-free, consider using a coconut milk with decent fat content (canned vs. boxed).
*Nutrition information is a rough estimate calculated with fortified almond milk and without sweetener or coconut oil.
*Recipe heavily adapted from the lovely Nutrition Stripped! 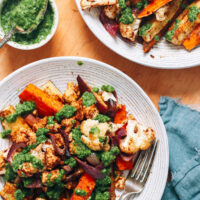 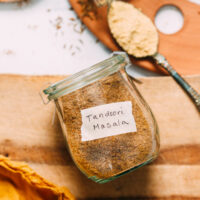 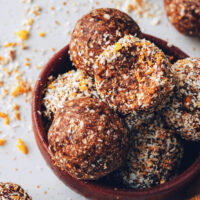 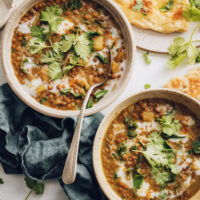