For a brief period of my childhood, my family lived in New Mexico, and you better believe while there we ate our fair share of Mexican food. I was floating down a river of authentic refried beans and slow-cooked carnitas and garden fresh salsas and loving it. My little palette was in foodie heaven and I hardly even realized it. Those were the days.

But I don’t live in New Mexico any more. I live in Kansas, which means the Mexican food isn’t quite as authentic or abundant. I may be part Swedish, Irish, and German, but I crave a ridiculous amount of south-of-the-border goodness. Lucky for me, John does, too. The solution? Make it myself.

The truth is, we eat some form of Mexican food at least three times a week, whether it’s quick lunches at Chipotle, black bean enchiladas or an impromptu taco bar. We can’t get enough of the stuff. But one meal I hadn’t tried at home yet was fajitas – one of my favorite meals to order at restaurants.

Something about the sizzling peppers and huge platter it comes out on and the self assembly –  over-stuffing to the point of ridiculousness – makes me feel like a queen.  A true foodie dream dish if you ask me.

The history of fajitas isn’t super clear. But it’s believed that they were invented by Mexican cowboys in the Rio Grande Valley of Texas. They started appearing on menus in the 1960s and continued growing in popularity after that.

One early fajita vendor (Otilia Garza’s Round-Up Restaurant) served warm tortillas with steak, guacamole, pico de gallo, and grated cheese. It’s not clear when peppers and onions became a common addition, but that’s how we’ve most commonly seen them served. Our version is not authentic, but is a plant-based take on the concept.

These fajitas remain vegan thanks to bell and poblano peppers and juicy and satisfying portobello mushrooms, sauteed in just a few simple seasonings.

They’re no carnitas, but certainly delicious in their own right. I felt full after just two, which is saying a lot for me – a true quantity eater. I suppose the giant spoonfuls of guac didn’t hurt either.

If you aren’t a fan of mushrooms, simply omit them or sub in your favorite meat. For a vegetarian version opt for scrambled eggs or black beans. And to keep these gluten free, simply opt for corn tortillas – I went with flour because that’s traditionally how fajitas are served.

Count this recipe as inspiration and proof that fajitas can be vegan and still totally, insanely delicious. Ole! 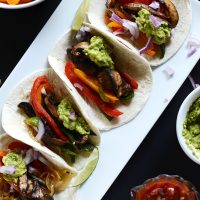 *You can sub 4 baby portobello mushrooms per 2 regular-sized portobellos.
*Nutritional information is a rough estimate calculated with olive oil, corn tortillas, and without steak sauce or toppings. 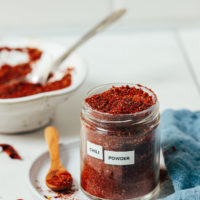 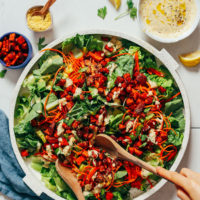 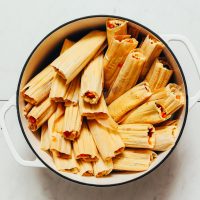