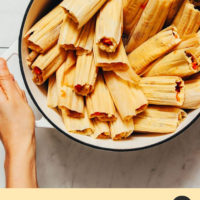 Ever since we learned how easy and delicious it is to make homemade tamales, we’ve been experimenting with different flavor variations. Our favorites so far have been Green Chile Chicken Tamales and Sweet Potato Black Bean Tamales (Vegan).

But we’re certain there are many creative flavor ideas still waiting to be explored! In the meantime, we thought it would be helpful to share our basic, easy formula with you as a base to let your creativity shine!

Tamales are believed to have originated in Mesoamerica (a region that includes parts of Mexico and Central America). They consist of a corn-based (masa) shell and flavorful filling (vegan, vegetarian, or meat-based) that’s wrapped in either a corn husk or a banana leaf and then steamed.

The process starts with making the dough. The main ingredient is masa harina, which is corn that has been cooked and soaked in lime water then ground into flour. This is not the same as cornmeal, so be sure to get the right one!

The masa harina is mixed with water and allowed to sit for 15 minutes so it can rehydrate. Then salt, baking powder, avocado oil, and broth are added until the dough resembles a thick paste.

Traditionally, lard is the primary fat component, but to keep things a little lighter, we like to use avocado oil and cut back the amount as much as possible without sacrificing on texture.

Once the masa dough is prepared, it’s time for the filling. We’ve had success with Green Chile Chicken and Sweet Potato Black Bean variations. But you can also use the following as a guide for experimenting with new flavors:

Sauté the onion and garlic, then add the meat, beans, veggies, and seasonings. Then cook until everything is tender and the flavors have developed.

When the masa dough and filling are ready, it’s time for assembly.

We like to use dried corn husks since they are most readily available. But during corn season, you can use fresh husks from corn on the cob or use banana leaves if they are available to you!

To make a tamale, hold a corn husk in your non-dominant hand (or place on a flat, clean surface) and make sure the wider edge is facing you.

Use the back of a spoon to spread 2 to 2 ½ tablespoons of masa dough from the bottom 1/3 center of the husk to the right edge (see photo below).

Then add your filling of choice to the center of the masa and guide the right edge of the husk over the filling, tucking it in.

Continue rolling until the seams meet (do this gently!). Then fold the narrow edge of the corn husk over where the seams meet and set it in a dish that will hold the tamales upright (such as a loaf pan).

Repeat until you’ve used up all of the dough and/or filling!

How to Cook Tamales

Simply place them upright in a steamer basket in a large pot or Dutch oven. Then cover and steam for 1 hour (sometimes a bit more). That’s it!

How to Freeze Tamales

Tamales are perfect for freezing because they’re easy to make in large batches and they reheat nicely.

To freeze, let the tamales cool and then add to a parchment-lined baking sheet in a single layer. Freeze until firm, then transfer to a well-sealed container. They should keep for at least 1 month, oftentimes longer.

How to Reheat Tamales

To reheat from the fridge, put the tamales in the microwave or in a cast iron skillet on the stovetop over medium heat until hot.

To reheat from frozen, let the tamales thaw and then proceed as you would if they’d come out of the fridge. For a quick thaw, you can microwave for 1 minute, remove the husk, then proceed with one of the above-mentioned reheating methods.

How to Eat Tamales

When ready to eat, remove the corn husk and discard it (compost if available).

We hope you find this guide helpful! And if you try this recipe, let us know! Leave a comment, rate it, and don’t forget to tag a photo #minimalistbaker on Instagram. Cheers, friends!

An EASY, step-by-step guide for how to make tamales at home! Flavor variations for plant-based and meat eaters included. Just 5 ingredients + a filling required!
Author Minimalist Baker
Print SAVE SAVED 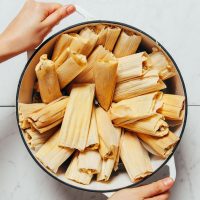 *Nutrition information is a rough estimate calculated with the lesser amount of vegetable broth and without filling.
*Masa mixture roughly adapted from Seasons of My Heart cookbook.

If you try making tamales, let us know how it goes! Leave a comment, rate it, and don’t forget to tag a photo #minimalistbaker on Instagram. Cheers, friends!