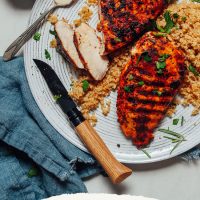 This chicken recipe has quickly become a go-to for weeknight grilling. Why? Because:

How to Make Grilled Chicken

Grilled chicken is just about as easy as it gets. Start with your chicken: We always try to go for boneless, skinless, organic, free-range chicken breasts). Brush a little oil, add your seasonings of choice (we’ll get to that next), and grill — flipping regularly to ensure even cooking — until you’ve reached an internal temperature of 165 degrees F (74 C). That’s it!

How to Season Grilled Chicken

Grilled chicken can be seasoned SO many ways. But this version has become our go-to. It’s adapted from Eating Bird Food’s amazing Apple Cider Vinegar Chicken recipe.

The answer is no. The vinegar tenderizes the chicken, which makes it super juicy. And it also enhances the other seasonings by adding a big of acidity to the overall flavor. 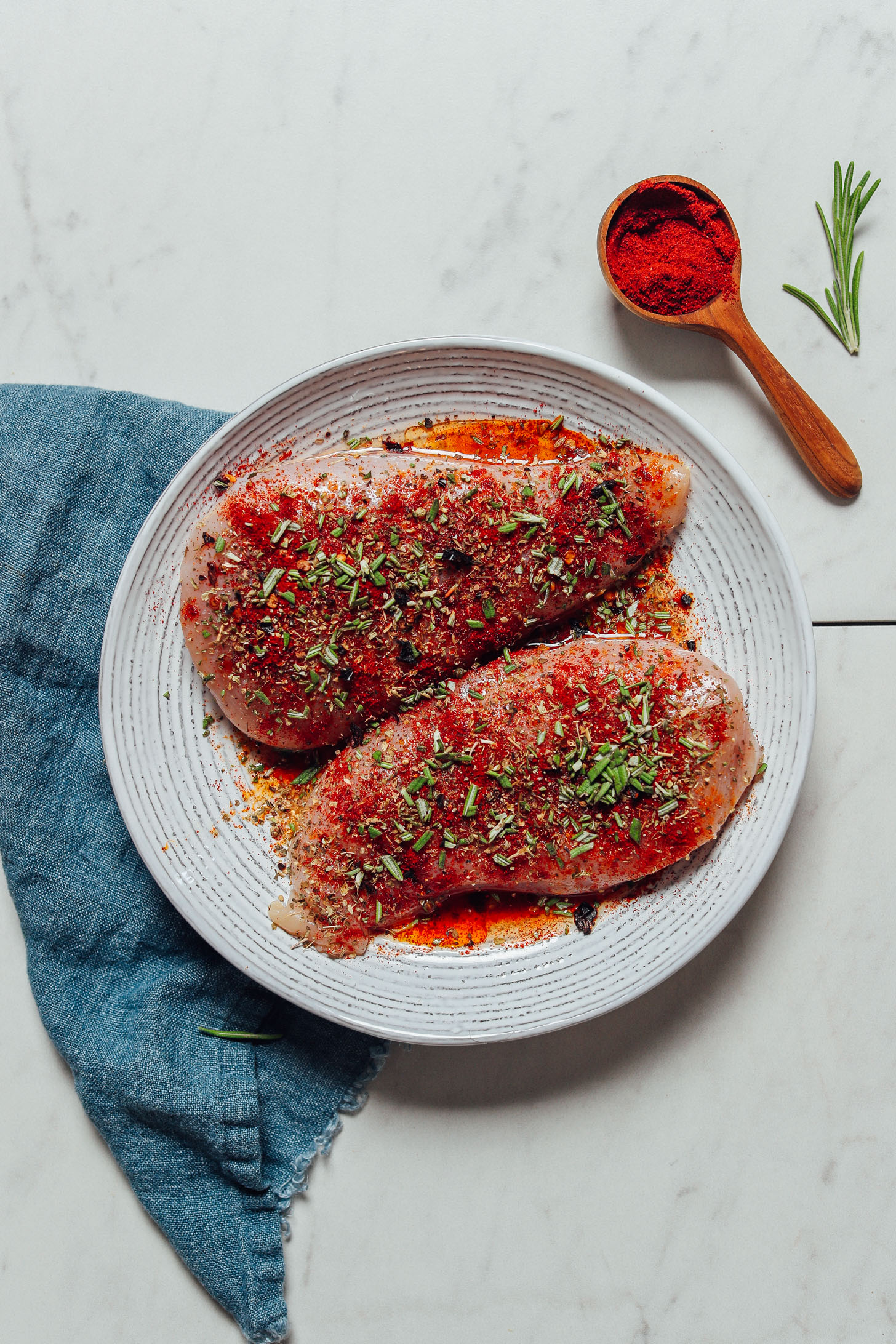 The Secret to Perfect Grilled Chicken

To keep the meat tender and not dried out, cook over a low flame vs. a high flame on the grill (or over medium-low to medium heat on the stovetop) for about 10-15 minutes, flipping occasionally until it just barely reaches 165 F (74 C). Perfect chicken every time.

Another tip? You can poke your chicken with a knife to allow the marinade and spices to more thoroughly infuse the meat with flavor. Also, marinating up to 24 hours in advance helps tenderize and enhance the flavor even more!

What to Serve with Grilled Chicken

Grilled chicken can be served alongside or on top of so many things! 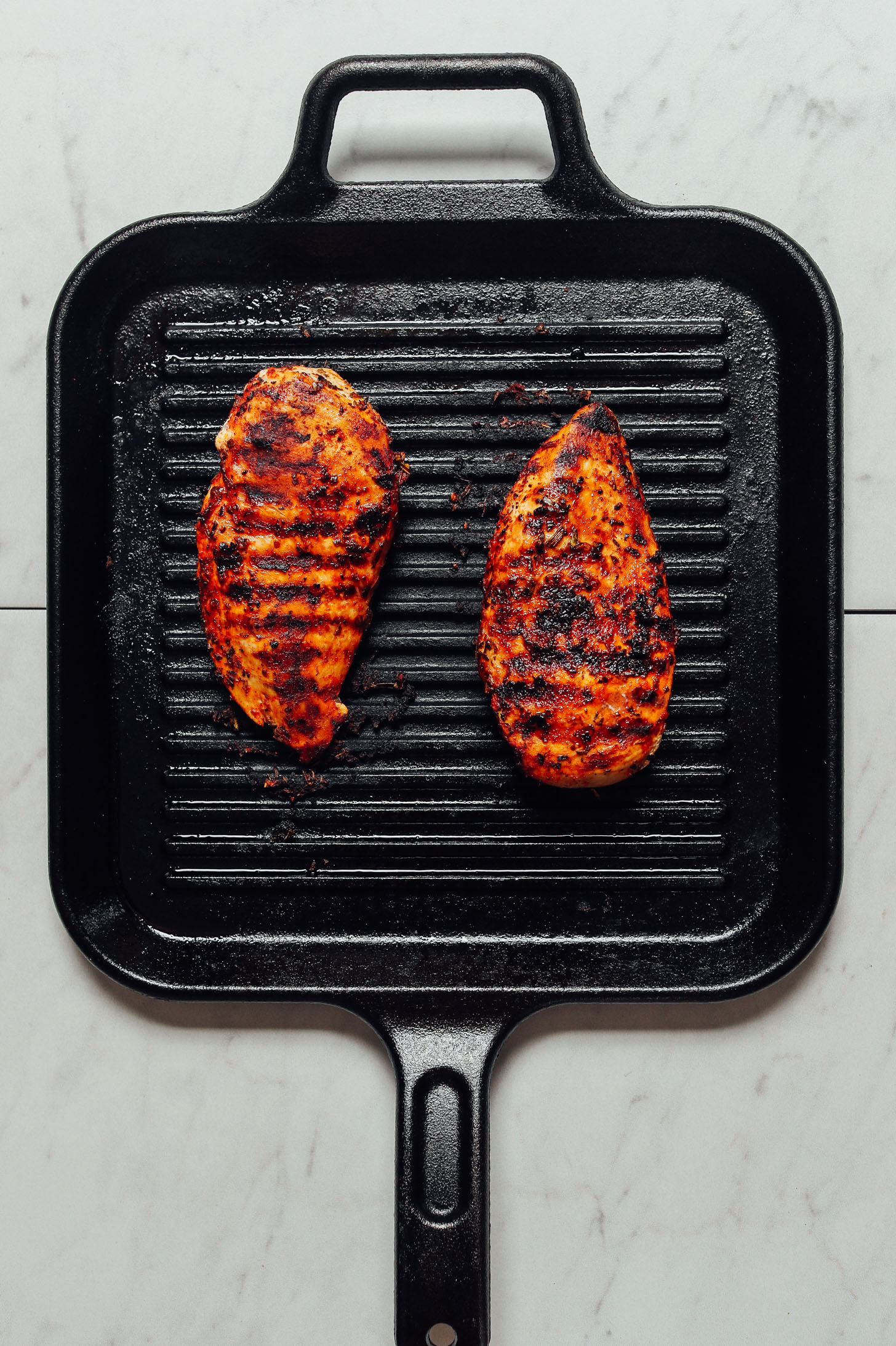 How long does grilled chicken keep? We find it keeps for 2-3 days in the refrigerator, making it perfect for preparing ahead of time and enjoying throughout the week.

If you try this recipe, let us know! Leave a comment and rating, and don’t forget to tag a photo #minimalistbaker on Instagram. Cheers, friends! 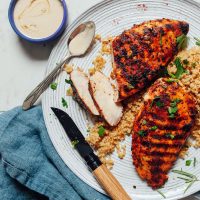 *Feel free to sub chicken breasts with another similar cut of meat — we suspect this spice rub would work well on other types of meat and fish as well.
*Though we haven’t tested it, we suspect a good vegan option would be to sub a block of extra firm tofu cut in half to yield two “steaks” — then proceed with recipe as instructed. This marinade would also work well with cauliflower steaks!
*Inspired by the lovely Eating Bird Food.
*Nutrition information is a rough estimate calculated without optional ingredients. 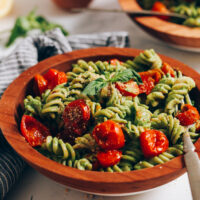 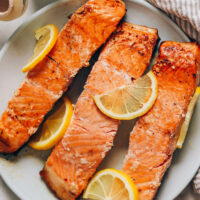 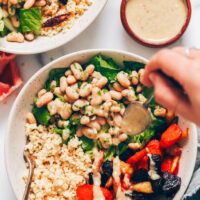 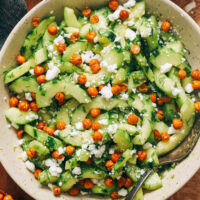