We just celebrated our fourth wedding anniversary and it caused me to reflect on our early days of marriage, living in Portland in late spring, early summer. I made us breakfast most mornings – just like I do now – and  we’d sit and talk with the windows open before getting to the day’s tasks. I discovered early on John isn’t a pancake guy. The thing is, I’m a pancake girl. But our common ground? French toast. Thank goodness.

Since going dairy-free, I haven’t made french toast as often as I used to, but I do miss it. Our favorite recipe is basic with a little cinnamon and vanilla, then topped with fresh strawberries and maple syrup or honey.

I’m not entirely egg-free (though am growing more suspicious of them by the moment), but I wanted to make a vegan french toast recipe A) to see if it was in fact possible to make french toast without eggs, and B) to come up with my own variation to share with you all, as I know there are already a lot of vegan frenchy recipes out there.

At first I considered “thickening” the batter with a starch (i.e. flour) of some kind, but then I really just wanted to keep it healthy and natural. And so, I went with chia seeds. I ground mine up to make them less visible in the final product (for those eaters of yours who inspect every bite and ask, “What’s in this?” before digging in). But this certainly isn’t a necessary step.

The batter is basic. Non-dairy milk, chia seeds, vanilla, agave, cinnamon. For the bread I went with a rustic wheat, and found that heartier breads to better here.

The trick to the batter is letting it sit to firm up a bit. Chia seeds typically take 10-15 minutes to activate (longer for pudding), and that’s about how long I let mine rest before dipping the bread in. Go longer for thicker batter, but no too long or it can turn into a pudding (which is not what you want). You’re basically looking for a batter that resembles traditional french toast batter with the egg. Ya dig?

The result? A dreamy, simple, perfectly-sweet french toast that’s completely vegan. So what does it taste like?

Me? I went with coconut whipped cream, fresh strawberries, and a little maple syrup. This would also be lovely with a compote, sliced bananas, peanut or almond butter, or agave. Consider this recipe a basic french toast base, perfect for adding whatever flavors you want to make it your own.

I hope you enjoy it! And if you do, be sure to take a photo and tag it #minimalistbaker on Instagram. It’s kind of my favorite. Cheers! 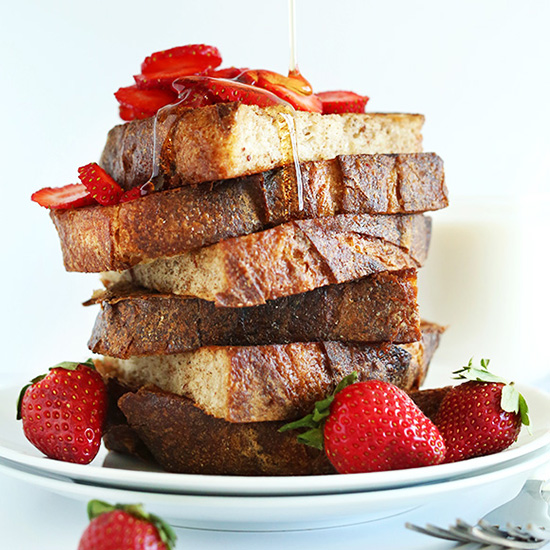 *Nutrition information is a rough estimate calculated with 1 Tbsp coconut oil for greasing, with the lesser amount of bread, and without toppings.

Nutrition Per Serving (1 of 5 slices)