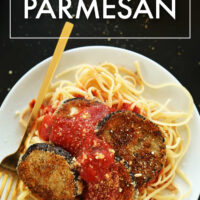 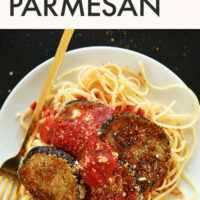 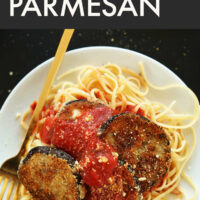 For some reason, eggplant used to intimidate me. Its floppy texture, neutral taste, and seemingly over-involved cooking methods made me think it would be something I’d never master.

Since getting my hands on my first eggplant last year, it’s become one of my absolute favorite fruits (yes, fruit, even though it’s a vegetable in my book).

Two of my absolute favorite recipes utilizing eggplant have been my Cashew-less Vegan Queso and my Eggplant and Caramelized Onion Dip. It’s neutral flavor helps it absorb flavors extremely well, and depending on how you cook it, its texture is extremely versatile – from super creamy to super crisp.

And in this little gem of a recipe, it’s crispy to the max! Before we dive into the recipe, let’s learn about eggplant parmesan and where it comes from.

Eggplant parmesan (or parmigiana di malanzane) is an Italian casserole dish made with fried eggplant slices, tomato sauce, and cheese.

It’s exact origin, however, is hotly debated! Some claim it was invented in Sicily, while others claim it comes from Naples, Puglia, or Calabria. You can read more about its history here.

The following version is not traditional, but a simplified, dairy and egg-free twist that skips the extra step of turning it into a casserole and instead serves the crispy fried eggplant slices with a side of marinara.

This recipe was inspired by one of my favorite food bloggers, Izy from Top with Cinnamon. It’s straight out of her beautiful new cookbook, Top With Cinnamon.

Although it’s not a vegan cookbook, it has a lot of recipes that can be easily adapted to a vegan diet. And when I laid my eyes on her crispy aubergine pesto pasta, I knew it was the one for me.

This recipe took a few tries to get just right sans egg, but I think I’ve done it (simply)!

It requires just 10 ingredients, employs easy methods, and takes a little more than 1 hour from start to finish. It is a little bit more involved than some savory meals I’ve cooked, but it’s one that John and I both love and crave, so it’s worth the extra time and effort!

I think you guys are going to LOVE this recipe! It’s:

I knew this recipe was a winner when I served it to John and he literally went back for seconds before I could! I love it when happy meal discoveries like that happen.

If you give this recipe a try, I hope you love it as much as we did! As always, tag us on Instagram with #minimalistbaker or Twitter @minimalistbaker if you do. Cheers! 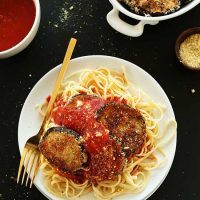 – Buy a narrow eggplant – the really big wide ones don’t get as crisp!
– Don’t skip the salt / drain step – it really helps draw out the bitterness.
– Once coated, make sure you get the eggplant in the oven as quickly as possible so it doesn’t sit there absorbing any excess moisture.
*Loosely adapted from the Crispy Aubergine Pesto Pasta from Top with Cinnamon’s new Cookbook!
– Really press down on the eggplant after rinsing to ensure you get all of the water out you can.
– Although it’s an extra step, browning the eggplant in the skillet in addition to baking yields the crispiest result! 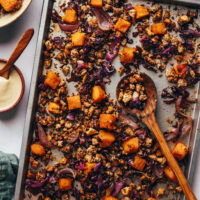 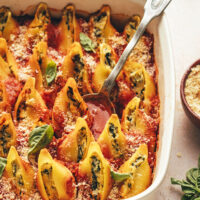 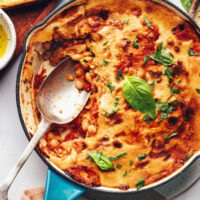 All commentsI made thisQuestions
Newer Comments