I had a bit of a debacle as to what to post Christmas week since everyone is so busy running around, wrapping gifts, traveling to see family and likely already have their holiday menus all planned out. But, I figured everybody surely has room for one more breakfast recipe in their back pocket with a week of lazy mornings surely on the horizon. Am I right?

For me, it was clearly between pancakes or cinnamon rolls. So, I put it to vote with a question on Instagram and got a TON of responses. You guys are seriously awesome. One, because you care about what we post. And two, because you inspired me to dream up an entirely new recipe I hadn’t even thought of yet.

About half way through the comments somebody suggested cinnamon roll pancakes and it’s like they read my mind! I was thinking the exact same thing in that very moment. The perfect marriage of two perfect breakfast foods. It was on.

(P.S. for those who voted cinnamon rolls, don’t worry! I’m already plotting two recipes that I think you’ll be quite pleased with so sit tight and eat pancakes in the meantime.)

I have never attempted cinnamon roll pancakes but I know they’ve been done before by a lot of bloggers, so I wanted to do something different and if possible, vegan. Turns out, both were entirely possible.

To get that quintessential cinnamon roll flavor I started with a yeasted, whole grain batter since nearly all cinnamon rolls have that amazing earthy, bakers-essential yeast flavor. I was so stoked to see that it rose to double in size just like I was hoping with all of its bubbly, yeasty goodness. Then, I scooped out a bit of the batter, added in brown sugar, cinnamon and a little melted butter and I had my cinnamon swirl in hand.

So easy and so delicious! Look how fluffy and decadent they look cooking up.

These cinnamon roll pancakes are legit and only require 8 ingredients!

That’s it! You likely already have all those things on hand. Plus, they produce a surprisingly small mess of dishes and come together start to finish in under 2 hours. Not bad for pancakes that cram all of the flavor of homemade, slow-prepared cinnamon rolls into every fluffy bite.

While I don’t think a glaze is necessary, I couldn’t bare trying them without one. I went with my favorite easy glaze that always yields plenty of leftovers: Powdered sugar, almond milk and melted vegan butter (recipe below). So good once it hits your lips.

Plus, they feed a crowd and can be easily doubled and tripled, with one batch making at least 8 large pancakes. (Two should be plenty for one person.)

Make these for your family and friends this week! I think they’ll love them. Plus, I have a feeling they’ll make your holiday gatherings a little bit sweeter and more memorable. Enjoy! 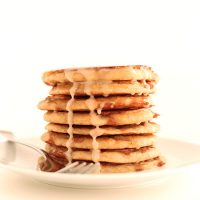 For the Cinnamon Swirl

*The batter will proof more quickly if you use rapid rise yeast, but active dry works well too. It just takes a bit longer.
*Recipe loosely adapted from Martha Stewart.
*Yields 8 large pancakes (as recipe is written).
*Nutrition information is a rough estimate calculated without glaze. 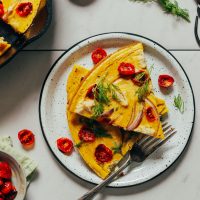 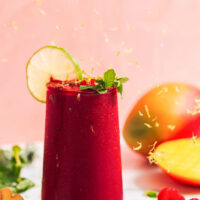 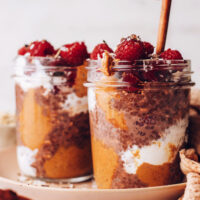 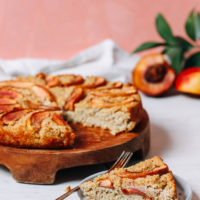