Things are about to get sexy up in here, White Russian style.

Back in my naive, just turned 21 days, I didn’t know a thing about ordering a cocktail. Long lists of complicated drink names only confused me, and after one too many well-intentioned friends tried to “initiate” me with a Jägerbomb, I nearly signed off liquor altogether.

Then came the White Russian.

A White Russian is so creamy, sweet, delicious and secretly potent. I didn’t figure out the potent part until I downed three within one hour and was then found running laps in a nearby parking lot just for fun. Hmmm, glad I’m not 21.5 anymore.

While a traditional White Russian is comprised of vodka, Kahlua and cream, I wanted to keep mine dairy-free so I opted for full fat coconut milk instead. Freeze those babies into cubes and you have the base for one seriously sensational frozen cocktail.

The coffee gets everything going in your blender and adds another element of coffee goodness to this drink. I could’ve slurped the whole batch down, but then I would’ve been running laps around our backyard and John would’ve have that. Thankfully I’m 26 now and just a tad wiser than my 21-year-old self. THANK GOODNESS.

The first written recipe for a White Russian Cocktail is believed to be from a 1930 cookbook called The Savoy Cocktail Book. It contained recipes for using vodka, which at the time, came primarily from Russia. The drink later became popularized by the 1998 movie The Big Lebowski.

This beverage is a D-R-E-A-M. Creamy, coffee-infused, plenty boozy and only slightly coconutty. Topped with a drizzle of chocolate sauce and it’s pure sin. Oh lordy, we’re going all in. Wanna join?

A creamy, frozen blended White Russian topped with chocolate sauce and made vegan with coconut milk instead of cream. So good you’ll never guess it’s healthier than the original.
Author Minimalist Baker
Print SAVE SAVED 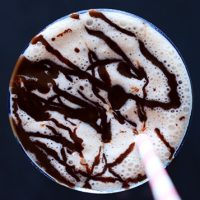 *Prep time does not include making coconut/almond milk ice cubes.
*To make this cocktail lighter, sub light coconut milk OR use half full fat half light or almond milk.
*Nutrition information is a rough estimate calculated without extra sweetener or chocolate sauce.
*There seems to be some dispute over whether Kahlua is vegan-friendly or not. Past formulations seemed to be, but on their website Kahlua says its “original” is not vegan-friendly. However, looking at the ingredients it’s unclear what’s not vegan-friendly about it (no dairy is listed and they don’t filter their sugar through bone char). If vegan, proceed with caution and read the ingredients depending on which Kahlua product you’re buying. 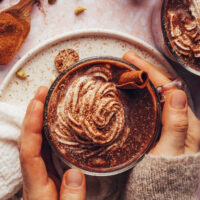 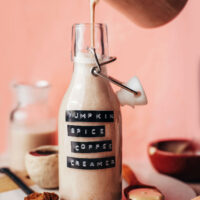 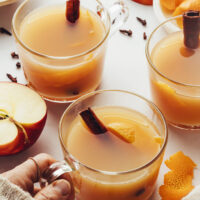 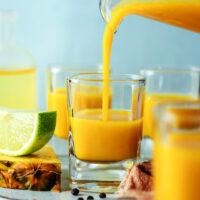