Since making our vegan take on traditional Indian naan bread a while back, I’ve significantly decreased my consumption of gluten, so naan was off the table for a while. Moment of silence as we grieve.

The gluten-free alternatives I’d tried up to this point were admittedly lackluster. I missed the pillowy, stretchy naan bread infused with garlic alongside my beloved curries, so I got to work. And the results were incredible.

Friends, behold, gluten-free vegan naan made in 1 bowl, in 20 minutes, with simple ingredients! It’s the gluten-free naan of my dreams, pairs well with SO many dishes, and is freezer friendly! Let us show you how it’s done.

Naan is believed to date as far back as 1300 AD when it was mentioned in the notes of an Indo-Persian poet. Then, around 1526, it became popular among royals of the Mughal era in India. Because naan contained yeast (which was very expensive), it was reserved for royalty. (source)

How much times can change! Once yeast became more readily available, naan’s popularity spread throughout India and to other parts of the world.

Our gluten-free version is not authentic but is inspired by the concept and ingredients. You can find an authentic recipe here.

How to Make Gluten-Free Naan

Naan is traditionally made with all-purpose (wheat) flour, which is not gluten-free. But the gluten provides a stretchy element that can be tricky to replicate with gluten-free alternatives. But friends, we’ve done the trial and error so you don’t have to!

For this recipe, we used coconut flour for its dense, wholesome texture then lightened it up with potato starch for fluffiness and arrowroot starch for a stretchy, pliable element.

Next, you’ll roll the dough into balls (about 3 tablespoons of dough each).

Use a rolling pin on a (gluten-free) floured surface to flatten the dough.

Though naan is traditionally made in a clay oven (called a tandoor), a cast-iron skillet works well for this recipe.

You’ll want to brown it on both sides and repeat with the rest of the batch.

And for quicker weeknight preparation, you can freeze the cooked naan and reheat in a skillet or in the microwave. So easy!

Enjoy this delicious naan as an appetizer, side, or snack! Pair with your favorite Indian-inspired dishes such as the ones below.

What to Eat with Naan 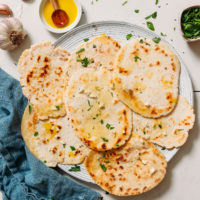 *Nutrition information is a rough estimate calculated without optional ingredients. 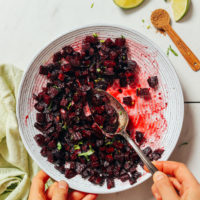 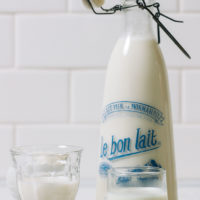 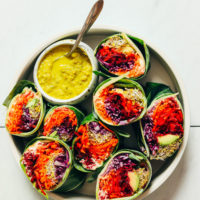