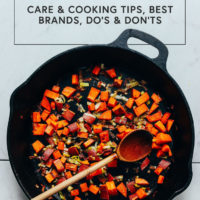 We’ve been wanting to create a guide to cast iron cookware for a while now as it’s our favorite kind of cookware, but can be a bit mysterious to work with if you’re new to the game.

So, today we’re answering your top questions and giving our favorite tips for cast iron cooking, cleaning, seasoning, and beyond. By the end of this guide, you’ll not only be a cast iron convert, but also feel confident in choosing, caring for, and cooking with cast iron cookware.

What is Cast Iron?

Cast iron is iron that has been melted, poured into a mold, and cooled. (source)

It’s incredibly resilient and durable, making it a desirable material for things such as pipes, machines, automotive parts, and (you guessed it) cookware.

When well cared for, it can last for generations, which is one of the many reasons to love cast iron pans. They’re durable, sustainable, and virtually indestructible. Not to mention, when properly used and cared for, they cook food beautifully.

Curious about how cast iron came to be? The earliest cast iron artifacts date back to the 5th century BC in China (source). Learn more about the history and resurgence of cast iron here.

How is Cast Iron Made?

Cast iron is most commonly made from a mixture of iron, steel railroad ties, recycled steel, castings shaken out from earlier production, and pig iron (a.k.a. crude iron, an intermediate product of the iron industry made by smelting iron ore in a blast furnace). This mixture of new and old metals makes it both sustainable and durable.

Curious about what the process looks like? We found this video demonstrating how cast iron is made very informative.

Our preferred brand for cast iron cookware is Lodge* as it’s accessible, affordable, and has held up incredibly well after many years of daily use. All Lodge cast iron cookware also comes pre-seasoned (which we’ll get to soon), so you don’t have to do anything besides rinse your pan with a little hot soapy water and it’s ready to use.

Beyond Lodge, there are many more reputable cast iron cookware brands on the market, including Staub, Smithey, Le Creuset, Finex, Field, Stargazer, and Milo.

*We are not sponsored by Lodge. We just love and use their cast iron cookware almost exclusively.

How to Season Cast Iron

Seasoning a cast iron refers to a process of baking oil into the surface to create a layer of carbonized oil, which forms a protective layer on top of your cookware. This not only helps give your cookware a sheen, but it also creates a virtually non-stick surface that makes for quick and easy cooking and cleaning. (source)

The easiest way to season a cast iron is to buy it already pre-seasoned. We love Lodge for this reason.

However, if you buy an unseasoned cast iron, simply:

Your cast iron is now seasoned and ready to use. However, if you notice there isn’t a nice sheen visible, or if the non-stick surface isn’t working very well, repeat this process several times (this is common with new cast irons). This process can also be repeated over the life of the cookware to preserve its surface and integrity.

Still a little lost on seasoning your cast iron? We found these additional pointers from Lodge helpful.

How to Clean Cast Iron

Perhaps the most common question when it comes to cast irons, and the answer is simple: With water and a brush.

The only thing you really need to do to your pan after cooking is rinse with warm water and scrub clean with a medium-to-firm bristle brush. Once it appears clean, simply let it air dry.

FAST DRYING TIP: My other preferred drying method is to set your clean cast iron back on your stovetop over medium-high heat and heat until the water evaporates (which helps prevent rusting). This should only take 1-3 minutes (do not leave your cookware unattended).

If you notice there are bits of food or black specks in the pan, use a more firm bristled brush or a stainless steel brushing pad to gently scrub the problem areas. Note: steel wool pads (like Brillo or S.O.S. pads) are not the same thing and should never be used on cast iron.

Once the pan is clean and dry, rub it with a bit of oil (canola or avocado work best in my experience) and leave it to rest until its next use. This gives the cookware a little love and moisture and helps keep the seasoning intact.

There’s no need to bake or season again unless it’s lost its sheen or the non-stick properties are wearing off (in which case, repeat the seasoning process outlined above).

NOTE: Never ever put your cast iron in the dishwasher. Exposure to a moist environment will lead to rusting.

Can you use Soap on Cast Iron?

It’s not a good practice and there’s no need to use soap on a cast iron as it can deteriorate the surface and seasoning. On occasion, if you cooked something like raw meat and want to ensure there’s no residual bacteria, you can use a bit of mild soap and water to clean it. But for everyday cooking purposes, it’s not necessary.

How to Care for Cast Iron

The best way to care for your cast iron is to cook with it and occasionally rub it with some oil, especially if it appears dry. If it has lost its sheen or the non-stick properties are wearing off, you can repeat the seasoning process listed above.

Speaking of caring for your cast iron, two things to limit or avoid are:

Overly acidic foods and beans can deteriorate the surface and seasoning over time (especially if your pan is new and the seasoning hasn’t fully set in yet).

However, these foods are okay in limited quantities. And because they aren’t always avoidable, just be in the habit of rubbing your cookware with a bit of oil after these uses to maintain the integrity of the pan’s seasoning.

Do You Need to Oil Cast Iron or is it Non-Stick?

I prefer to use a little oil when cooking but it doesn’t require much (unless you’re going for a pan-fried effect, in which case you can add oil until it just coats the surface).

It’s good for the cast iron to be recoated with oil from time to time, but it doesn’t need to be oiled every time it’s used.

For instance, when frying an egg, I don’t find it necessary to add more oil to the surface before cooking. But when stir-frying veggies or grains, a little oil can be good to sear the ingredients and prevent them from sticking.

You may need to experiment a little with which foods benefit from oil when cooking and which foods can go without.

How to Fix a Rusty Cast Iron

If your cast iron is rusting, no worries. These things happen, especially when cast iron is exposed to moisture over a prolonged period of time or if the seasoning has worn off.

If your cast iron rusts, simply repeat the seasoning process, giving special attention to the scrubbing and cleaning process at the beginning, ensuring all rust gets removed by using a stainless steel brush pad as needed.

Last but not least, the health benefits and risks of cooking with cast iron. I found Andrew Weil to have a great explanation of both sides of this debate.

“Cast iron cookware does ‘leach’ iron into food and that can be an advantage, not a disadvantage, particularly for pre-menopausal women who don’t get the 18 mg of iron they need daily,” according to Weil.

He went on to cite a study published in the 1986 Journal of the American Dietetic Association that showed “cooking in cast iron skillets added significant amounts of iron to 20 foods tested,” including increasing the iron content of 3 oz of applesauce from 0.35 mg to 7.3 mg and scrambled eggs from 1.49 mg to 4.76 mg.

On the other hand, this can be a disadvantage for people who already get an overabundance of iron in their diets. Weil explains, “There’s plenty of iron in red meat, beans, lentils, millet, chickpeas, dark leafy greens, molasses, dried apricots, dried peaches, pumpkin and sunflower seeds, pistachios, walnuts, almonds, scallops, clams, oysters, soybeans, and many other foods.”

He also states that cast iron cookware should not be used for deep frying as iron can accelerate the oxidation of fat and cause it to become rancid.

That concludes our guide to cast irons! As you can tell, we’re avid cast iron enthusiasts and use them as our go-to every day.

We hope this guide was helpful. But if you have more questions about cast iron, let us know in the comments!