Waking up at grandma’s house was always slow. My sister and I would be jostled in the sheets next to each other in the hideaway bed in the living room while my mom and grandma carried on quiet conversation in the kitchen.

The sun would start to stream in and we could smell the scent of mediocre coffee with too much cream and equal. When we finally came to we’d take turns in the bathroom doing damage control on our hair and face creases before shuffling into the kitchen. My sister was most often less chipper than I was…I’m a morning person by nature. But grandma’s cinnamon sugar toast always seemed to bring out the morning person in all of us, even the night owls.

After deciding to try a dairy free diet out on January 1, I knew it would be difficult if only for the fact that I would miss ice cream. Whether planned or sporadic, John and I had gotten into the habit of visiting our local dairy/ice creamery at least once every couple weeks to pick up eggs, milk and a double scoop.

It’s now been nearly three weeks since I’ve had ice cream and I was starting to fall off my rocker a little bit, so a dairy-free recipe was a must. I’ve experimented with no-churn recipes before and while they’re great for simplicity’s sake, I knew consistency would be key in a non-dairy version. So I ran downstairs and borrowed my friend Laura’s ice cream maker and two cans of coconut milk later I was in business. The cinnamon sugar toast came inspired by my grandma’s favorite breakfast item and one that I often still crave.

I took a tip from the coconut ice cream queen, Oh, Ladycakes on this recipe and kept it very simple. The result was just what I’d hoped for. Though it did taste like coconut, it was rich and creamy and sweet just like regular ice cream. And I adored how the cinnamon sugar and actual toast flecks gave it a whole new flavor dimension. This isn’t a 1-for-1 trade up, but it certainly did the trick in satisfying my ice cream longings. 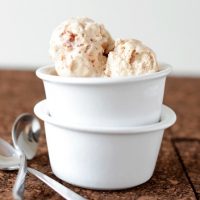 *Nutrition information is a rough estimate.
*Prep time reflects actual hands-on prep time. Does not include refrigeration and freezing time. 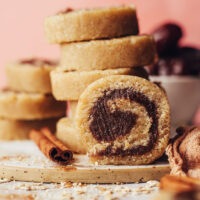 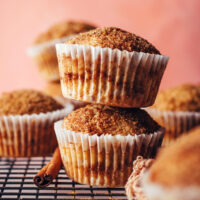